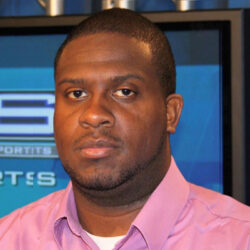 BIOGRAPHY: Woube Gebre: is a Media Specialist for the City of Hampton/Hampton City Schools. His passion is Sports broadcasting in which he is the Sports Analyst for NSU Sports Network that features ESPN and Sirius XM radio. He also has a podcast that he produces which includes many athletes and entertainers from throughout the region. Woube is also a member of the committee for the Peninsula Sports Hall of Fame.

Woube was born and raised in Baltimore, Maryland. He graduated from Old Dominion University majoring in Communications. At Old Dominion, he was the Sports Director at the University radio station and a Sports Columnist for the school newspaper. He began his journalism career at WRVA-AM radio station in Richmond, VA. where he was the morning show producer in 2000. He worked at various television stations including WTVR CBS 6, WTKR News Channel 3 and WAVY-10 as an editor. Woube is elated to be able to impart so much of his industry knowledge into budding journalists.