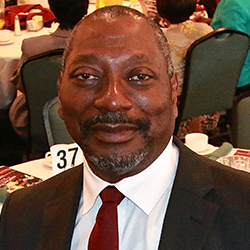 BIOGRAPHY: Leonard Colvin: Leonard Colvin is the Chief Reporter at the New Journal and Guide in Norfolk, VA. He earned the title after landing the job and working in several positions since 1987. Leonard is a graduate of the University of Arkansas (UAPB) with a degree in Speech and Dramatic Arts with a concentration on Mass Communications. Leonard started his career as an intern at a KARK-TV in Little Rock where he was a teleprompter operator.

Another internship at the Pine Bluff Commercial landed him an opportunity at the newspaper. After two years with the Commercial, Leonard enlisted in the Navy, stationed in Guantanamo Bay Cuba, becoming a navy and marine corps journalist. Upon leaving Cuba, Leonard became stationed on the USS Truitt in Norfolk, VA. After 2 and a half years, Leonard was offered and accepted a job at the Journal and Guide (Now known as the New Journal and Guide), the third oldest Black-owned publication in the nation.