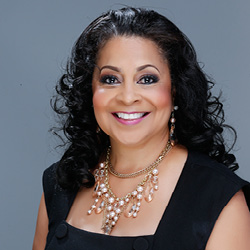 BIOGRAPHY: Alveta Ewell comes to HDReps with nearly 40 years in television news. Her knowledge of the history of this industry, and an intuitive perception of its future, makes her an invaluable asset to HDReps and its clients. She served as the main co-anchor of the top-rated WAVY News 10 newscasts at 6:00pm and 11:00pm since September1989. She retired from WAVY in 2013.

Alveta is a rarity for the business in that she was a native in her market, spending the majority of her career in the Hampton Roads, Virginia area. Born in Norfolk, she is a graduate of Chesapeake’s Great Bridge High School and received her bachelor’s degree from Norfolk State University.

As a student of Norfolk State, Alveta interned at WVEC-TV. After graduation she co-anchored newscasts with Dick Lamb on WWDE-FM. She reported for WTAR-AM before returning to television as morning news anchor and reporter for WVEC-TV. Alveta was promoted to co-anchor WVEC-TV’s 6:00pm and 11:00pm newscasts. She held that post for five years before moving to WAVY-TV as its’ evening anchor.

Through the years she’s interviewed politicians from every level of government, including seated Presidents. Her interviews span from civil rights activist Rosa Parks to Haitians being repatriated in Guantanamo Bay, Cuba, and military trainees in Puerto Rico. She was also a keen supporter – both in front of the camera and behind the scenes – of our nation’s soldiers and sailors and their families. She was born in a community and understands what it means to contribute to that community.

Alveta is a former board member of the Taylor Bend YMCA in Chesapeake, Virginia, and a former member of Delta Sigma Theta Sorority Incorporated’s Presidential Cabinet of the Information and Communications Committee in Washington, D.C. She is also the Journalist and head of Publicity and Public Relations for the Chesapeake-Virginia Beach Alumnae Chapter of Delta Sigma Theta Sorority Incorporated.

As a representative, her skills will be instrumental in coaching journalists in the art of storytelling, serving the community, and providing the audience with what is so essential to their daily lives – the news of the day. Her ability to maintain her status as a main anchor through a multitude of owners, managers, and co-anchors, speaks highly of her navigational skills in the politics of television news.

We have no doubt her skill set will be passed on to each and every client that Alveta works with.